Today I have a special treat in the form of a guest post from Nick Lake, while I haven't read anything by him yet, my friends at Bloomsbury have done a great job of pushing him and his book, Hostage Three which I got at BEA13, is next on my TBR pile.

I've heard talk that he has a new title coming out in 2015, so I wanted to introduce him to you now. It's also really important to note that his 2012 title, In Darkness, won the Printz Award, so I would keep an eye out for his 2015 title, There Will Be Lies.

So without further adu, the fabulous Nick Lake:

I have a confession: when I write I am American.

This is not, I have to say, particularly a matter of choice. After In Darkness, I actually started writing a book with a British, male narrator. This boy would go on a round the world yacht trip, and get captured by Somali pirates. I already had a title for it – Hostage Three – and most of a plot, which had come to me in a dream. I gave the first few chapters to my wife to read. I asked her, after a few pages, what she thought of the character. “She’s really interesting,” she said.

So I made the character a girl. Amy. I wrote a first draft of Hostage Three, and gave it to my wife again, along with a couple of other readers, one of them American. “It’s good,” they said, and verily, I was pleased. “But she’s not British,” they said. “She’s American.”

I was displeased. I thought I’d have to re-write the book, change the voice.

But then I realized there was a lazy author solution: I simply made Amy half-American.

Then, when I wrote my next book, There Will be Lies (coming January 15 folks!)  I went for the path of least resistance and made the narrator a girl from Arizona, right from the bat.

What I don’t know is why this happens. But I do have a couple of theories:

Theory 1: My childhood. I grew up in Luxembourg, and ALL the TV I watched was American. So, this theory goes, when I write in third person I write in “British”. But then I write dialogue – having been raised on 90210 and MTV’s The Real World – I write in American.

Theory 2: Gender is a societal lie anyway, and fluid. I’m a boy but I love reading fiction, hate sports, and have more than a passing interest in art and fashion. So I feel more comfortable writing from a ‘female’ perspective. Which in itself is an arbitrary lie and our brains are all the same, really.

Theory 3: I just don’t like my own voice. There is some evidence for this. With my best and oldest friend, and with my wife, I speak almost exclusively in other accents, or in impersonations of celebrities. I go around the house talking in other people’s voices, scraps of gobbledegook, made-up songs. My three-year-old daughter recently said to me, “Daddy, why do you say such silly things all the time?”

Don’t ask me why this is. It’s tempting to psychoanalyze: again, I grew up in Luxembourg, speaking a generic European version of British RP pronunciation, while my parents spoke with very different accents from Lancashire, in the north of England (think the northerners in Game of Thrones). I was also half deaf, so maybe these two things combined to mean that I didn’t ‘sound’ like myself when I spoke.

One thing I do know, which makes it all the more complicated, is that Amy is… me. By which I mean: with the exception of the being-taken-hostage-by-pirates stuff, a lot of the things that happen to her in the book, or more accurately have happened to her, also happened to me. Her family is, in part, my family. It’s the most personal book I have written.

So my confession goes even deeper.

Amy in Hostage Three really is me. 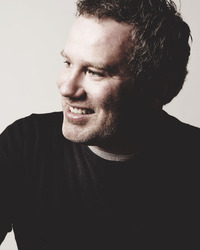 My name is Nick and I write and edit books for children and young adults. I wrote a vampire ninja trilogy called BLOOD NINJA but nowadays I mainly do what could perhaps be described as literary thrillers. The first of these, IN DARKNESS, was published by Bloomsbury in 2012. The second, HOSTAGE THREE, came out January 2013 in the UK and is coming October 2013 in the USA. The third, as yet untitled, will be released in 2014 and is about a girl who learns that everything she knows is a lie. To say it's a book with a twist in the story would be a massive understatement. There is also a talking coyote in it.

at 1:12 PM Posted by Paperback_Princess