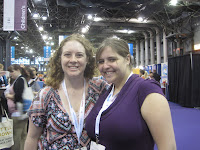 So my first real day at BEA was pretty splendid. Mom and I took the ferry over, and took silly pictures inside the "Reached" Bubble. We then met up with Kristan and her sister Jamie and from there we all divided and conqured. I shot over to Heather Gudenkauf's signing while my mom scoured the floor. I got to talk to a bunch of other bloggers who were waiting in line, like Jenn from Crazy For Books and Jamie.

From there I kind of just wandered the floor trying to get a feel of what it was like. In hindsight, I wish I had taken a photos of the floor to show you how immense this place was. And it was huge, and there were just so many books and people to meet. It was actually really overwhelming and I realized that I had gone about the whole day to start with very wrong when I met up with my mom and she had like 30 books and I had 1 from the signing that I was at.

I really appreciated having my mom there as a partner in crime to be sure that I hit all of the books that I wanted. She said herself that she would have to come with me next year for two days rather than one. I know that having had this been my first year I saw what mistakes I made and which ones I would make up for. I got to meet Ally Condie at her signing of Matched, which I know a lot of people were bummed about since it wasn't Reached, but I did get to take a cool picture inside the Reached Bubble.

My mom happened by the Random House booth and told them that she loved Rizzoli and Isles when she saw the bookmark on their table, and then they gave her a T Shirt that said Rizzoli and Isles on it. When I met up with her while she was standing in front of the booth, she told me to ask about it, but didn't tell me what would happen when I did, so I got a really awesome T-Shirt that day too.

I was glad I was able to get my mom what she wanted which was the chance to meet Justin Cronin and get a copy of The Twelve. If we walked away with nothing but that book, I would have declared it a success. (But I was glad to get all the books I did anyway!)

People at BEA were killing me with their kindness, not just from Day 1, but also Day 2. I inquired about The Last Dragonslayer by Jasper Fford to Houghton Mifflin only to be told that they were out. While this was happening, my mother was sitting and resting at a table that they had for meetings so she missed this conversation. I told her and sort of shrugged it off as an oh well, but then the woman standing behind her reached into her bag and pulled it out and handed it to me saying that she got an extra. I was totally floored by this, and thanked her profusely. There are still good people in the world.

Although we were late for it, I got to hang out at the Apocalypsies meet and greet which I regret I wasn't more useful with my camera. I met Gretchen McNeil (Ten), Claire Legrand(The Cavendish Home for Boys and Girls), Lenore Appelhans (Level 2), and a whole bunch more. I didn't realize that I was totally ignoring Kat Zhang (What's Left of Me) as I gushed at Sarah Maas (Throne of Glass) (and had I realized who she was I totally would have gushed at her too).

My mom and I wound up being the last ones out of the room other than all the authors which I felt bad about, but then didn't because both of us were just so exhausted and achey from pounding the floor all day. I do have to say that my highlight of the day was making James Patterson smile for the camera. I think if he were to write me into one of his books, I would be swiftly dispatched. (But he smiled!) (I have to add that photo later because it was on my mom's camera, but that image is coming soon. In its very own post!)

In total for Day 2, but really BEA Day 1, I came home with 81 books, that we had to lug all the way down to the ferry because even if we had 2 suitcases, and the rain, it was still 81 books! Of the things I learned, I learned that no suitcase is big enough, I need to study Authors pictures so I know who they are and I don't accidentally ignore them, like Kat Zhang and like Claire Legrand who was sitting behind me in line to get in and always ask for business cards.

at 11:36 AM Posted by Paperback_Princess