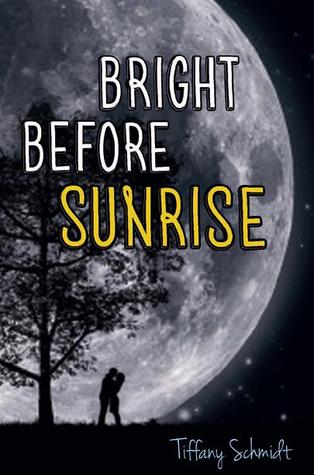 For the release of Bright Before Sunrise, Bloomsbury did something very cool, they decided to do a reverse blog tour where the bloggers and authors talk about one night that changed how they see themselves and the world. This was a challenge for me because I had no idea where to start. There was no moment that really changed how I saw the world, only ones that brought me down hard that I'm not really ready to face. Instead I picked a moment with my sister below. Before we get to that you can check out the Bright Before Sunrise Tumbr where authors and bloggers are sharing their moments. You should also take a second and read up about Bright Before Sunrise. I've already read it and loved it!


When Jonah is forced to move from Hamilton to Cross Pointe for the second half of his senior year, "miserable" doesn't even begin to cover it. He feels like the doggy-bag from his mother's first marriage and everything else about her new life—with a new husband, new home and a new baby—is an upgrade. The people at Cross Pointe High School are pretentious and privileged—and worst of all is Brighton Waterford, the embodiment of all things superficial and popular. Jonah’s girlfriend, Carly, is his last tie to what feels real... until she breaks up with him.
For Brighton, every day is a gauntlet of demands and expectations. Since her father died, she’s relied on one coping method: smile big and pretend to be fine. It may have kept her family together, but she has no clue how to handle how she's really feeling. Today is the anniversary of his death and cracks are beginning to show. The last thing she needs is the new kid telling her how much he dislikes her for no reason she can understand. She's determined to change his mind, and when they're stuck together for the night, she finally gets her chance.
Jonah hates her at 3p.m., but how will he feel at 3 a.m.?
One night can change how you see the world. One night can change how you see yourself.

I had the hardest time with this prompt for a few reasons. One of them is that I feel that nothing to big has happened to me. I have lived an easy life and I am thankful for that, but the more I thought about One night that changed my life, the harder it was. I thought through important nights in my life, including prom and important moments in my relationships both romantic and familial.

Then I remembered the night when I was in 5th grade, and I learned something about my life that had been obvious, but not at the same time. At the time, my older sister was living with my parents and I and she was tutoring at a Sylvan Leaning Center. On our way home one night, we stopped by her office and she introduced me to some of her students.

This was not an unusual occurrence either, but as she introduced me to them, she kept introducing me to them as her half sister and this was something that was a new concept to me. She had always been my sister and while I knew we had different dads, this meant that we were only half sisters?

I know that my sister doesn't think of me as a half sister, but the thought had never really occurred to me until she said it. But even after that unspoken truth came out, it didn’t change anything. My sister was my sister and that wasn’t going to change no matter what any one said or what percentage our blood was the same. She is my sister and nothing will change that. It changed how I looked at the world because there are people that put that sort of weight on their relationships, but family is family.

While that moment was just an announcement of the truth, it didn’t change a thing for me and nothing ever will. If anything, that moment made me want to be more like her because of her truthfulness and how unafraid of life she is. She may read this and be sad because she didn't realize that I hadn't really understood, but I harbor no resentment against her, between us there is nothing but love and hope for a future because know that I'm an adult, we can grow closer that way.

at 8:00 AM Posted by Paperback_Princess