Made For You Blog Tour 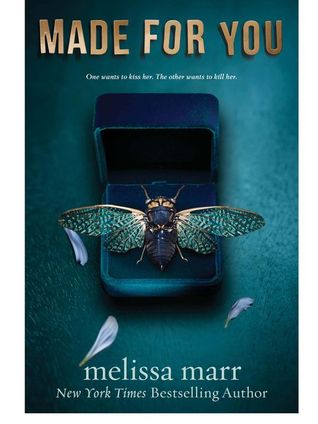 Bestselling author of the Wicked Lovely books Melissa Marr’s first contemporary YA novel is a twisted southern gothic tale of obsession, romance, and murder. A killer is obsessed with Eva Tilling. Can she stop him, or will he claim her?

When Eva Tilling wakes up in the hospital, she’s confused—who in her sleepy little North Carolina town could have hit her with their car? And why? But before she can consider the question, she finds that she’s awoken with a strange new skill: the ability to foresee people’s deaths when they touch her. While she is recovering from the hit-and-run, Nate, an old flame, reappears, and the two must traverse their rocky past as they figure out how to use Eva’s power to keep her friends—and themselves—alive. But while Eva and Nate grow closer, the killer grows increasingly frantic in his attempt to get to Eva.

This was my first book by Marr and it was fantastic. I adored the entire story from start to finish. It was also great to read while in the middle of a Criminal Minds marathon because I could see the killer in this book spiraling the way that some of these killers do in the show.

I really liked Eva and I felt that she had a whole lot going for her and her characterization. She was strong but maintained a level head through the whole process. I'm not sure I would have been able to do that. I did think that she was too mature at some points, but that's not entirely unrealistic.

I adored Nate and wanted to smush his face as he believed Eva and fought to be with her. things were not always easy for the two of them, except that once they started being together it was all easy from there.

I thought that the book could have been drawn out more. Rather than 2 weeks, it could have at least taken place over the span of a month or more. The ending also felt incomplete because we don't really get an answer as to what happens to her visions. Do they abruptly stop? Does she still get them? Were also introduced to some concepts that are important to the killer that seem to get tossed to the wayside.

I really enjoyed this book and can't wait to see what else she's got.