World War II, 1942. A court decision makes women subject to the draft and eligible for service. The unproven American army is going up against the greatest fighting force ever assembled, the armed forces of Nazi Germany.

Three girls sign up to fight. Rio Richlin, Frangie Marr, and Rainy Schulterman are average girls, girls with dreams and aspirations, at the start of their lives, at the start of their loves. Each has her own reasons for volunteering: Rio fights to honor her sister; Frangie needs money for her family; Rainy wants to kill Germans. For the first time they leave behind their homes and families—to go to war.

These three daring young women will play their parts in the war to defeat evil and save the human race. As the fate of the world hangs in the balance, they will discover the roles that define them on the front lines. They will fight the greatest war the world has ever known.

I am loving this recent trend toward not just historical fiction in YA, but alternate histories. Wolf by Wolf also covered World War Two, but in this case, women were allowed to join the army. As I was reading it, I kept thinking about how different the world would have been not just for their efforts, but for how women would have been regarded and given equal rights.

I think Rio is by far the main character out of the three girls. I'm not sure if that is going to change to each girl in the subsequent books or if that's going to be consistent, but Rio was delightful to follow. I didn't really understand her reasons for joining the war, but it was great to see that she rose to the occasion.

I did like Frangie, she was so sweet and kind, but honestly, I felt like she was put in the book because people are rallying for more diverse main characters, and then never got the page time. She had such an interesting take to tell, not just as a woman, but as an African American woman, and there were so many times that I wish we had gotten her side.

To be fair, she did get more page time then Rainy did. I liked Rainy well enough, but it always felt like she was just too clever. She had just one chapter less than Frangie did. I felt that while she had one of the more interesting story lines, her full potential also wasn't explored.

I do hope that the next book really fleshes out who they are and there experiences. I'm also dying to know who our narrator is! 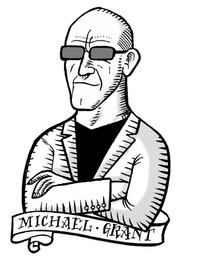 but way better. I'm the co-author or author of about 160 books, including the ANIMORPHS series, the GONE series, the BZRK series, the MAGNIFICENT 12 series (Mommy, make him stop saying series!), the MESSENGER OF FEAR series, and soon (well, eventually) the SOLDIER GIRL series.The best way to reach me is at Twitter @MichaelGrantBks. I'll be honest: I keep forgetting there's mail here. Here's the thing: I don't have an assistant or a staff. I would, but then I'd have to hire someone and train someone and give them stuff to do, and relate to them as a human being, possibly even care about them. I'm exhausted just thinking about it. But if my handle is in the Tweet, I read it. And once or twice a week I go on at random times to chat with fans. I love my fans, but it's either be honest with you and be my actual self on Twitter, or fob you off on some assistant, and how would that be better? I already have my father-in-law handling email from my ancient website. I'd rather be harder to write to but really be me, and really talk to you, if that makes sense. Honestly, if it was up to me and I had the time we could all just hang out at random Starbucks. Or if you're over 21, a pleasant cocktail lounge perhaps. At some point there would be ice cream. There must always, at some point in the day, be ice cream. I also have a personal Facebook page at AuthorMichaelGrant, but that's limited to 5000 friends and apparently I actually have that many. Who knew? But I leave it public so if I have something to say I'll do it there. I hope you'll give my books a try. If you don't like one, that's cool, I don't like every book I read, either. But maybe give them a try. People seem to like them. Now, my publishers want me to sell you on my stuff, so I'll do two brags: 1) Everything I write is like nothing you've ever read before in young adult literature. I don't copy, I don't imitate, I don't clone. 2) I know how to end a series. And that's my advertisement. Thank you.

at 1:30 AM Posted by Paperback_Princess