This post is going to be a little different than my usual one's I'm going to have a shorter review followed by an interview with the author. I don't usually read fantasy, so I liked the chance to come out of my comfort level for this book.


Only Thera of Allenholme hears the voice of forest-mind…and heeds its warning . Thera doesn’t know why the Elanraigh forest-mind chose her, of all the Allenholme folk, to hear its voice and to awaken her gifts of mind and spirit. The Elanraigh sends a warning dream; black sails swooping toward Allenholme from across the western sea—the Memteth, an ancient enemy, armed with blue fire that hungers to consume life. As Thera awakens to her gifts of bonding with raptor birds and reading hearts, the knowing; she also awakens to love. Will she choose Chamakin the young Ttamarini warrior who is a kindred in spirit to her, or the polished young nobleman who covets her beauty even more than her estate? Forest-mind is aware she is yet too young for such power and responsibility. It has no choice—the lives of all Thera’s people and the existence of the Elanraigh Forest itself, depend on Thera fulfilling her destiny. Can she learn what she must of gift, and heart, to survive what comes their way?


At first this book was a little tricky, like I said I don't usually read fantasy so it took some getting used to. Once I got past that initial discomfort I was able to fall into a nice rhythm of this book. There were a few moments that I wished she had been a little more descriptive. Thera proved to me a powerful force to be reckoned with, I liked the world that Hunter created, the idea of being able to communicate with nature and call on it for favors and help when defending her people. There was love, there was loss, this book had everything in it. The only thing that left me wanting was that this world world could have been further explored. Hunter not only left me wanting more of this world, but a sequel as well, which it was left open to.

First I want to tell you a little bit about Sandy Hunter: 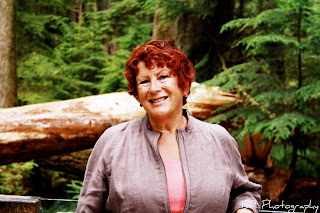 at 9:13 AM Posted by Paperback_Princess