The Hunger Games: The Movie

So I've expressed how much of a book nerd I am to all of you. I told you about my books, how much I intend to read and that I love to go to the midnight release parties for books as well as for the movies. What makes you think Hunger Games was any different? Not only did I go to the midnight viewing, but I went with my mother, my best friend (who was jet lagged from having landed from a trip to London not 24 hours earlier), and my boyfriend (who I forced to read the book, but admits he enjoyed it). I know this is a little late, but I still had things to add to it.

We got there at 9:30 to find that there was already a line out the door. We hit Target for snacks, Barnes and Noble for coffee and then we went to the theater where they told us they had already let in about 200 people so we could head on in if we wanted to. We found four seats easily, and then settled down to wait for two hours. I had a book with me and so did my best friend, but the boy had to venture down four stories, back to his car to get his. And there we sat reading while the younger children around us screamed in excitement. (I was going a little deaf when they started to hand out posters to whoever was the loudest.) Side note to the posters: My mother marched down to the employees and demanded a poster, who told her they were only for the kids, she proceeded to remind the worker that she was in here talking to him months earlier about the movie, and then he gladly handed one to her. Mom -1, Little kids - 0.

There was lots of screaming when it came to the movie starting and the theater getting darker- but how could there not be? We had all been sitting for TWO HOURS waiting-just waiting. Thats when it started. I spent the entire movie squeezing my boyfriends hand because it was the most stressful movie I have ever seen.

On to my review. Which contains spoilers about the movie.

I LOVED THIS MOVIE. People can say what they want about it, but I thought that it was great. The audience laughed when they showed Gale as Katniss and Peeta kissed-every one took in a deep breath of air when Rue was killed. Maybe it was being there at midnight because believe me, its different then seeing it with another kind of audience because everyone there loves the characters the way you do, and there is a different emotional reaction with the movie.

My chief complaint was the camera work. I felt dizzy at points with the handheld camera which was intended to make you feel like you were there. In the beginning of the movie when she goes to hunt with Gale all it does is make you feel dizzy. Toward the end of the movie, as Katniss, Peeta, and Cato fight to the death on the Cornucopia all it does is create confusion because all you see are three figures- in identical dark clothing- fighting, every so often you see a flash of blond hair and the muttations trying to get at them. At one point the camera is panned out so you are overlooking the trio on the structure and that gave you a much more clear image of what was going on, and I liked that better. 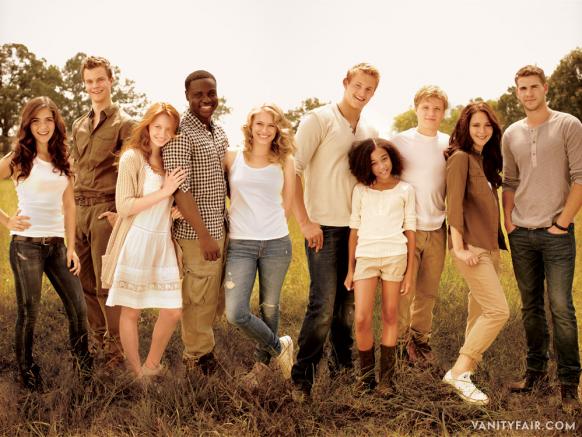 I can't pretend like they didn't change things in the movie, such as editing out Madge (which I understand-adding her to the movie would have made no sense because she has nothing to do with the rest of the plot in this movie, and they can probably add the information about her to the second one), or adding scenes with President Snow and Seneca Crane. Most of the adjustments I agreed with and that was ONLY because Suzanne Collins was one of the screen writers.

Some of the liberties that seemed to be added from the story were all things that there was no way Katniss could have known such as how Seneca Crane died and that the idea of two winners came from Haymitch. The only question from there is was that something Suzanne Collin knew but had no way to include?

So, I'm writing this part of the post, almost a month after the release, and I have to say I still felt the same excitement and glee watching it the second time. This time I actually cried when Katniss volunteered for Prim. I still jumped when Katniss and Foxface ran into each other (Literally). Something that I did notice was that I didn't like Jennifer Lawrence. Maybe her acting as Katniss was just that good, but I found her scenes with Peeta so disingenuous, and awkward. I felt that her acting could have improved as far as her interactions with people, her hunting and her emotional scenes were better, but every time she opened her mouth, I realized I couldn't care for what she was saying.

I also realized how much I loved Seneca Crane and his facial hair. I hope that Lawrence gets better for the next movie and that she can fake it a little better. Although I will say this, if her awkwardness was intended in those scenes, then bravo.

I still think that I could go see this movie another time, and perhaps watch it on repeat when it comes out on DVD (Which I will be getting it the same day it releases.) I actually think I'm going to make my wedding theme Hunger Games...with an open bar...and a sign that says "May the odds be ever in your favor."

Email ThisBlogThis!Share to TwitterShare to FacebookShare to Pinterest
Labels: barnes and noble, Foxface, Jennifer Lawrence, Josh Hutcherson, Katniss, may the odds be ever in your favor, movie, peeta, prim, Suzanne Collins, Target, The Hunger Games

at 1:26 PM Posted by Paperback_Princess