So day three was actually Wednesday for me. That day I had a friend who is an educator come with me, so I didn't feel alone. Little, did I know that this day of them all would be a day that I would feel the least alone. I started out the day with Kristan and Jamie and Lexie who I didn't get to see much of the day or any of the days really. It was there that we met Sylvia who turned out to be someone awesome to spend the day with. While we were waiting on line, two beautiful Angel boys started walking around talking about the cover reveal of the final book in the Hush, Hush saga.

We started out hitting booths that we really wanted and then Kristan and Sylvia and I meet up at the Harlequin booth for their Teen Hour signing. We had gone to their signing the day before and it was there that we found out we missed Alice in Zombieland, a book that went out to the first 50 people. We made sure we were the first 50 on Wednesday. We shows up 2 hours early and managed to convince them to hand out the books because I had to run over to Sarah J Maas's signing of Throne of Glass. I was super stoked that I got the books signed and was able to accrue so many more books in those two hours. Sylvia and I had a debate on how to pronounce Julie Kagawa's name, which she settled in my favor. I also got to meet Kady Cross who had bubblegum pink hair (which I loved) and she was rocking some great crowns on her person.

From there we went to gather a few more books, and then I sat in line for the Harper Teen signing, another two hours where everyone left their books with me while they ran around and got more. Not that I'm complaining, I got to sit while everyone else made a mad dash for other books. Kristan went to the Throne of Glass galley drop and grabbed me an extra for me to pass on to my co-blogger Amy. (Happy Birthday Amy!) Then it turns out that the 5th in our group, Angel grabbed another one for me, I wound up with three copies. Sylvia grabbed me The Name of The Star by Maureen Johnson because I was stuck holding down the fort. 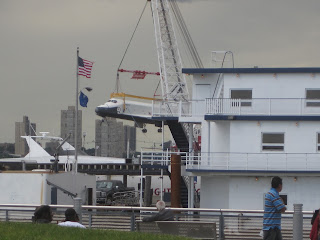 After that there wasn't much else going on, I managed to grab Libba Bray's The Diviners signed with a really cool necklace as well. I think one of the best moments was when I managed to grab Eve and Adam after I missed getting it on Tuesday. That was a really great moment. My biggest regret is not taking more pictures to show you guys, I guess there is just so much going on that I didn't realize how much time I didn't have to do a lot of things.

On my way back from the Javits Center (alone since my friend left half way through the day), I saw that they were placing the space ship on the Intrepid and that was really cool to get to see. While on the ferry back to the mainland, I met Anna from Read Between the Lines who were also their way to their hotel. They didn't get a copy of Throne of Glass, so I gave them one of my other copies and a few secrets about what I learned through the day.

at 2:31 PM Posted by Paperback_Princess