Sara had always been careful.
She never spoke of magic, never associated with those suspected of handling magic, never thought of magic, and never, ever, let anyone see her mark. After all, the last thing she wanted was to end up missing, like her father and brother.
Then, a silver elf pushed his way into Sara's dream, and her life became anything but ordinary.


Inspired by classic fairy tales, but with a dark and sinister twist, Grim contains short stories from some of the best voices in young adult literature today:


Waiting On Wednesday is a weekly feature hosted by Jill at Breaking The Spine that highlights upcoming books we're waiting for.

This week I am so looking forward to RUBY ON THE OUTSIDE by Nora Raleigh Baskin. 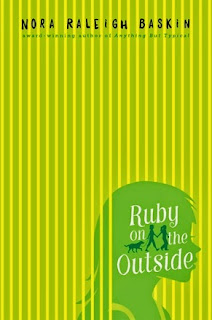 Ruby’s mom is in prison, and to tell anyone the truth is to risk true friendship in this novel from the author of The Summer Before Boys that accurately and sensitively addresses a subject too often overlooked.
Eleven-year-old Ruby Danes is about to start middle school, and only her aunt knows her deepest, darkest, most secret secret: her mother is in prison.
Then Margalit Tipps moves into Ruby’s condo complex, and the two immediately hit it off. Ruby thinks she’s found her first true-blue friend—but can she tell Margalit the truth about her mom? Maybe not. Because it turns out that Margalit’s family history seems closely connected to the very event that put her mother in prison, and if Ruby comes clean, she could lose everything she cares about most.


Full disclosure: My dad is in prison. He's been for a while and will be for a while longer. When I was Ruby's age, I kept this secret close. It felt like holding my breath and knowing that soon, I would have to let go. I was lucky enough to have friends that understood and when I was ready to share, it didn't feel as awful. But for young children, it can be hard to open up. This is an issue with such stigmatization--from the media, society, our own governments--that a lot of people feel the need to stay quiet. I'm so glad that Nora is giving a voice to this issue and hopefully it is one of many to come.

Email ThisBlogThis!Share to TwitterShare to FacebookShare to Pinterest
Labels: Brianna, nora raleigh baskin, ruby on the outside, waiting on wednesday 1 comment:

May The Fourth Be With You: My Top Sci-Fi Books

I'm here to celebrate this awesome day for geeks and nerds, like myself, and I choose to celebrate it while also giving mega shout outs to some of my favorite Sci-Fi books and there authors :) Now, I've narrowed my list down to just the top 5 (they aren't in any particular order. Narrowing it down to just 5 was hard enough). So without further ado....

This book was a great sci-fi retelling of the ever popular, Snow White. Self-exiled to a distant cold planet, Essie works fixing drones at a mine (7 drones to be specific). She works in peace until one day, a man named Dane crashes near her home. She agrees to help him repair his ship but is soon swept up into a calamity of events that she has spent her whole life trying to avoid. Now, she must risk everything, and figure out who to trust, for the survival of the galaxy and her life.

This was a truly great book and I could barely put it down. Essie quickly turned into one of my favorite heroines with her snarky and independent personality. All the characters were really heart-warming, even the 7 little drones. I also loved how it kept elements of the original Grimm's Snow White, as well as keeping true to the aspect of "happily ever after".

If you haven't heard, the story centers around Cinder, a cyborg mechanic living in a futuristic world full of prejudice humans, a plague that threatens the lives of every human on the planet, and villainous Lunars, aliens who are able to control the whims of humans with just a thought. Her life becomes intertwined with the prince, Kai, and is instantly thrown into a struggle, and an attraction, that leaves her caught between duty and freedom, loyalty and betrayal all while trying to find a way to save the world, and people, she loves. I love Cinder's attitude and resolve through all of these trials so if you haven't picked up the book yet, get your booty to a bookstore and get started! (You might as well just buy the two sequels, Scarlet and Cress, while you are at it...)

It's a decade in the future and humans are using parasites, a sort of genetically engineered tapeworm, keeps humans healthy and disease free. But now those tapeworms want a life of their own and start taking over their hosts. This book takes an interesting take on the zombie apocalypse idea.

Now it has been a while since I read this book but I definitely will be diving back into this series. I remember Sal, the main heroine, being downright hilarious! And she's not the only interesting character. There are a lot of characters to watch and enjoy, just within the first book! If you are a fan of Stephanie Meyer's, The Host, or just like zombie or viral apocalypses, this is a great book to check out :) The second book, Symbiont, is already out for your reading pleasure, with the third book, Chimera, coming out this November 24th :)

What Sci-Fi list would be complete without superheros? In these comics, we find our famous "sidekicks", breaking away from their superhero counterparts and making a league of their own. Our little sidekicks are all grown up and fighting evil :') If you are a fan of Cartoon Network's Teen Titans, be aware that this is a little different. We still see Beast Boy, Raven, Starfire and Cyborg, but you see them in a new element. If you are also a fan of Cartoon's Network's Young Justice, be also aware that the superheroes you love (Robin, Superboy and Kid Flash) are a little different. It's like reading the Walking Dead comics and watching the tv series; they are just different. But different isn't bad :) They each have their unique qualities that make both worth viewing.

Last but not least, by my favorite author, SYLO. We see a typical high school student, his friends and family and the small town he lives in on an island, being invaded by the U.S. military called SYLO. Suddenly, a mysterious ship appears in the sky one night adds to the mystery. And then, if things weren't strange enough, a mysterious stranger named Feit appears with a weird red crystal called Ruby that bring strange powers to any who take it. Now, Tucker and his friends must work to rescue their cozy, little island town and possibly the world.

This is one of those books that pulled me in with the first sentence and keeps me hooked for the whole book. MacHale creates a great mystery that keeps you on your toes throughout the whole ordeal. Just when you think you know what is going to happen, BAM something else hits you when you don't expect it! It's fabulous! The book is jam packed with action and adventure as well. If this book sounds up your alley, pick it up and get reading (the second and third book, Storm and Strike, are already out!). If you like this book, try his other series, Pendragon, for a more fantasy based series.

There you have it! I hope I helped expand some of your reading lists. Even I have some books I need to go back and read now (plus series' to finish). Happy Reading!