The Time Will Come #2 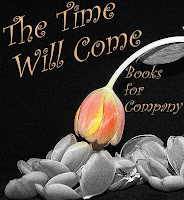 As I explained last week, The Time Will Come is a reading meme hosted by Books For Company. I will be hosting one book a week that I really want to read that I just haven't gotten around to it. I'm going to try to stick to books that I have waiting for me at home since I have 3 shelves full.

This week the book is The President's Vampire by Christopher Farnsworth. The second book in a series. I got this book in hardcover when Borders was closing, and I was trying to snatch up whatever books I could. Although I am a big zombie fan, I do have some love for vampires. The first book was fun and quippy since Nathaniel Cade (the vampire) and the president's assistant Zach, don't exactly get along. I'm excited to see what the second book brings. I've also included the book trailer for the first in the series. It doesn't get your blood pumping (tehehe), but it does offer some intrigue. I think one of the reasons I keep hiding from this book is because its in hard cover, and I really hate hardcover.

For 140 years, Nathaniel Cade has been the President's Vampire, sworn to protect and serve his country. Cade's existence is the most closely guarded of White House secrets: a superhuman covert agent who is the last line of defense against nightmare scenarios that ordinary citizens only dream of.


When a new outbreak of an ancient evil-one that he has seen before- comes to light, Cade and his human handler, Zach Barrows, must track down its source. To "protect and serve" often means settling old scores and confronting new betrayals . . . as only a centuries-old predator can.

at 11:35 AM Posted by Paperback_Princess