The Princess In the Opal Mask: Interview with Jenny Lundquist

Earlier this morning, I posted my review of The Princess in the Opal Mask, I really enjoyed it, and my excitement got to go a little further when I was able to interview the author, Jenny Lunquist. If you don't know Jenny, you can read a little bit more about her here. 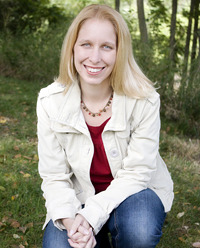 Jenny Lundquist grew up in Huntington Beach, California, wearing glasses and wishing they had magic powers. They didn't, but they did help her earn a degree in intercultural studies at Biola University. Jenny has painted an orphanage in Mexico, taught English at a university in Russia, and hopes one day to write a book at a café in Paris. Jenny and her husband live in northern California with their two sons and Rambo, the world's whiniest cat.

Without further adieu, onto the interview!


Which sister do you relate to more?

I relate to both sisters, but I suppose Wilha is a little bit more like me. In high school I was really insecure and somewhat fearful. While I admire Elara’s grit and toughness, I am not like her at all. Originally, I was only going to tell the story from Elara’s perspective, but as I got to know Wilha more, I really liked her, and wondered if the story should be told from her POV instead. Ultimately I decided that the best way to do justice to the book was to split the narrative between both girls, a decision I am so happy with, as I feel like it’s given more depth to the story as a whole.

If I was stuck wearing a mask on my face day in and day out, you can bet that, like Wilha’s, it would have a ton of bling. Opals, diamonds, gold and gilt, you name it. Who would actually be paying for me to have this ultra expensive mask, I have no idea, but that’s the type I’d be hoping for.

When writing the book, did you draw your own Map? If so do you care to share? 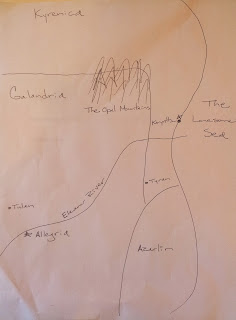 Sure! I did a rough sketch of the map that existed in my head and handed it in to my illustrator, the talented Teresa Bonaddio, at Running Press. It’s incredibly difficult for me to even draw stick people, so it took several tries for me to even get the simple sketch down. After I sent it to Teresa, she drafted up the fantastic version that made it into the book (and, unlike mine, doesn’t look like a kindergartener drew it). And, because I’m working on the sequel, I needed them to add in extra places that did not appear in my original sketch or in The Princess in the Opal Mask. Spoiler alert for the sequel: It’s possible that one or both of the girls just might find themselves back in Galandria at some point and journeying to new places!

When did The Princess in the Opal Mask become an idea for a book?

That’s a difficult question to answer, as the story came to me in pieces over a period of almost ten years. I think the precise moment when I knew I had a story I needed to tell was one night when an image just “jumped” into my head: Of a dirty, neglected teenage girl sitting on a wooden stool. A door opened in front of her, and whatever she saw caused her features to twist with shock and horror. The writer in me wondered what could surprise her so much. So I swung my “mental POV camera” around, and when I saw what was behind the door, I was shocked, too. I think that’s when I knew I absolutely had a story. Chapters 16-18 of the finished book are a direct result of that image.

Even though this is your third book, how did it feel knowing that you were going to be published again?

It felt just as exciting as the first time, particularly since this is my first YA book. And it’s particularly sweet since these characters have been with me for so long. After so many years, Elara and Wilha seem like real people to me, and I’m hoping others will like them just as much as I do.

What sort of research went into this book?

Although this book is set in a fictional kingdom, there’s a bit of seventeenth and eighteenth century French history that have slightly influenced elements of the story, so I did a little reading on that time period. Also, does Googling pictures of masquerade masks qualify as research? Because I did a whole lot of that. I keep a board here on Pinterest of images that inspired me while I was writing the book, and I pinned some of the more colorful masks I drooled over. 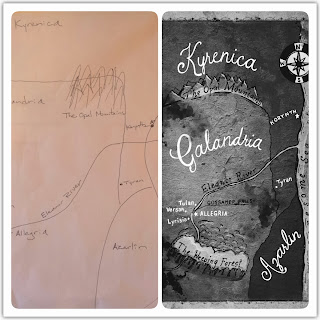 In the course of looking at all the masks I found out about The Carnival of Venice, a festival held in—you guessed it!—Venice, wherein people wear masks and make merry. It’s now on my bucket list to attend that event. One day, I’m going to rock a Venetian mask and costume!

How many books do you have planned for this world?

I’m currently working on the sequel, which is the final book in the series. I’m having a blast writing it, and while I don’t want to give anything specific away, I’ll just say that readers can expect more in the second book. More romance, more adventure, more fun!

Email ThisBlogThis!Share to TwitterShare to FacebookShare to Pinterest
Labels: Interview, jenny lundquist, The princess in the opal mask

at 12:00 PM Posted by Paperback_Princess